You are here: Home / Fish / Fish Spawning Explained: How Does it Affect Fishing?
2
2
Shares

You might have heard the term fish spawning before in relation to fish reproduction. Spawning simply refers to the period when fish release their eggs and sperm into the water – resulting in reproduction. The process typically involves females releasing ova (unfertilized eggs) into the water, which males then fertilize by releasing spermatozoa (milt) in the area.

The vast majority of fish reproduce by spawning, although some give birth to live young – similar to mammals. During the period leading up to spawning, most fish tend to be highly active and begin feeding heavily as they prepare to spawn. This can lead to some exciting fishing!

If you’re curious about fish spawning and how it affects your chances of catching a trophy fish, I’ll break down the spawning times of several popular species, as well as strategies to capitalize during this time.

When do fish spawn?

Fish species spawn at different times, with several factors influencing the exact time of the spawn. Generally, freshwater fish are spawning in the spring and summertime, but it can vary widely depending on the exact species.

Water temperature is one of the major factors that influence spawning. Different species have different preferred spawning temperatures. Walleye, for example, will spawn when the water reaches 45° to 50° Fahrenheit. Largemouth bass, on the other hand, spawns between 68° and 72° Fahrenheit. The first fry (when baby fish leave the egg sac and start feeding themselves), usually occurs close to the upper spawning range.

Waterway Depth is another factor that can influence spawning time. A large lake won’t warm up at the same rate as a small pond. Deeper areas generally warm up later than shallower areas near shore.

Rainfall and snowmelt can influence spawning time as well; especially heavy rain or melt that increases water levels. This can cause lower or inconsistent temperatures which can delay spawning.

Light influences the spawning cycle by changing fish behavior. When the light cycle shifts and the day/night periods change, this can indicate to fish that’s it’s time to begin spawning.

When does spawning begin?

As mentioned previously, fish spawn at different times, depending largely on water temperatures. Check out this chart for a quick look at what temperature various freshwater fish spawn at:

At the beginning of spring, as temperatures begin to rise, bass begin to feed heavily in preparation for the spawn. Like other fish, higher temperatures lead to increased metabolism – which means a need for more food.

They’ll eat nearly anything during this time, including shad, minnows, bluegill and other small baitfish. They also have a particular preference for crawfish during this time, as their high protein content help with egg development in females.

As they prepare for the spawn, their feeding increases, as they won’t be able to feed during the 10-14 days of the actual spawn. During the spawn itself, bass aren’t actively foraging anymore, and take a defensive approach. They’ll attack anything that presents a threat to their eggs, such as bream, bluegill, salamanders, and frogs. Lures and baits that imitate these species will work well.

Post-spawn, the males stay in shallower water and guard the fry, while the females head out to slightly deeper water to recuperate. Because the fry tend to stay in shallow water close to the surface, you can catch the males with top-water baits like poppers, buzzbaits, and frogs. Females can be caught with just about anything during this time. 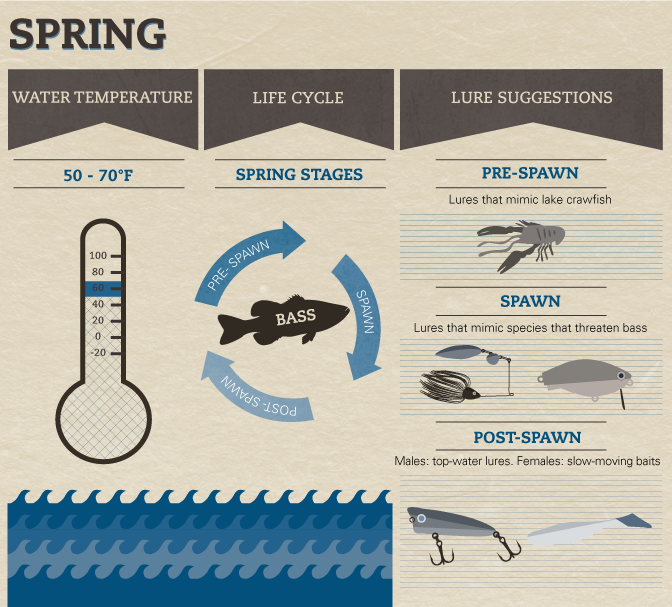 Salmon spawning is one of the most incredible natural events in the world and is referred to as a salmon run. The annual run is a major source of food for a variety of animals including bears, bald eagles, river otters, seals, and of course fishermen.

Salmon migrate back upstream to the same place they were born in order to spawn. The young spend their early lives in these rivers before swimming out to sea where they spend the majority of their lives. After several years at sea, when they’ve reached maturity, they transition to a ‘spawning phase’. This involves profound physical changes including color changes, development of canine-like teeth, growing humps, and changes to their muscle function.

During the run itself, most salmon will swim upstream through fast-flowing water, waterfalls, rapids, and other obstacles. They negotiate these obstacles by leaping or jumping – and have been known to make vertical jumps up to 12 feet high! When they finally reach their spawning ground, they complete the spawning process, rapidly deteriorate, and die shortly thereafter.

As salmon generally stop eating during the spawning period, so they won’t bite at just any bait or lure. The key to catching them as they make their run is to entice them or anger them with something they can’t resist. Cut bait can work well – as the scent can trigger them to take a bite. They also have a genetic tendency to eat any roe they encounter; so many fishermen will use this as bait. Heavyweight lures and spinners like the ones in the well-made Mepps salmon lure kit will also work well.

Temperate also plays a major role in salmon behavior during the run. They prefer cooler temperatures in the 50° to 55° Fahrenheit degree range – which results in more aggressive biting. When the temperature rises they become sluggish and are more difficult to catch.

Check out my review of the best Salmon and Steelhead rods if you’re in need of a good Salmon stick.

Trout spawning behavior varies depending on the trout species. Rainbow trout spawn in the late spring and early summer, as water temperatures begin to rise. Brown trout spawn in the fall, in September and November. Both species return to the same streams and rivers where they were born to spawn.

Lake trout, on the other hand, spawn in the autumn, and during the nighttime hours. They spawn in the same lakes that they normally inhabit, typically seeking out sand bars and graveled shores.

As spawning begins, the female trout will seek out a graveled area with good water flow. She will then dig a hole called a redd, using her body to displace the gravel and sand. This will attract the attention of nearby males, who will then compete with each other for the right to fertilize the eggs. Unlike salmon, once the trout finish spawning, they continue to spawn many more times throughout their lives.

If you’re fishing for trout during the spawn, it’s a good idea to avoid catching fish that are actively spawning, and avoid the redds. This will prevent accidentally damaging the delicate eggs and ensures that plenty of healthy fish will be around for next season. You can still target fish nearby, and they’ll be nearly as aggressive as the ones that are actively spawning.

Catfish spawn in the warmer spring and summer months. Channel and Blue catfish spawn between 70° and 84° Fahrenheit, white Flatheads prefer 66° to 75°. Unlike many other fish, catfish are notoriously difficult to catch during the spawn. They like to spawn in dark cavities called nests, which can be in hollow logs, excavated caves, old tires, woodpiles and the like.

The male selects the nesting site and cleans it in preparation for the spawn. He then vigilantly guards the eggs and nest from intruders, and won’t leave until the eggs have hatched and the fry has left the nest. The male will eat very little while guarding the nest, making them notoriously difficult to catch during this period.

Luckily, the spawn only takes several weeks, and after that, the fish are biting again. Keep in mind that because temperatures differ in the same body of water, you can often find fish that are pre-spawn, spawning, and post-spawn in the same lake or river.

Hopefully, you now have a better idea of how fish spawn, as well as how it can affect fishing tactics and strategies. Spawning can have a major impact on fish behavior, so make sure to do your research before heading out!

Ready to take your outdoor game to the next level?

We'll keep you in the loop with the latest tips, gear info, how-to articles, and giveaways.